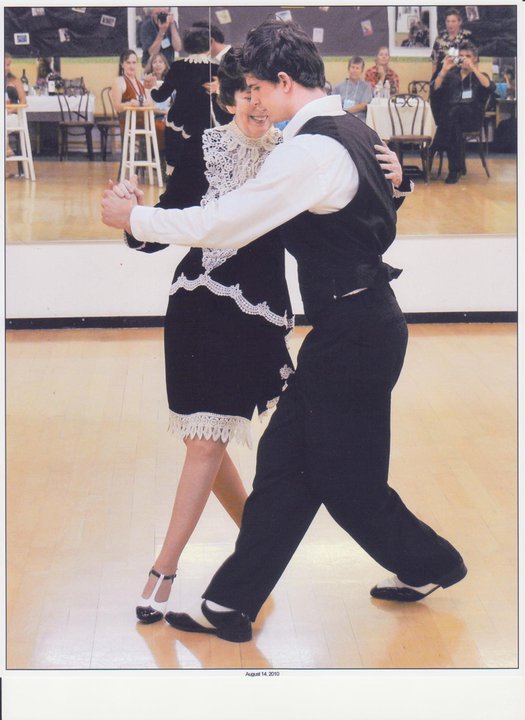 Tango can be a real twizzler at times.

During one tanda a follower can be in the arms of a dreamy partner who takes her to Nirvana and the next she’s in the grips of a cavorting clown from planet Bizarro Aires.

For leaders, an excellent follower can melt in his arms and blend like butter  with every move while the next can make it feel like he’s driving a Mack truck, and cause him to consider taking up bowling.

Sometimes it’s clear from the start that a partnership is headed for wonkerville. Saying “Thank you” after the first song might feel uncomfortable, but life is too short for wonky tangos.

If a man leads with his hands and arms or bends his head and shoulders into his partner’s space, she might want to say, “Stand up and lead from your axis!”

If a woman hangs onto her partner or squeezes his hand or arm to keep her balance, he might want to say, “Stand up and follow from your axis!”

On one occasion my partner’s posture and embrace were more twisted than a Bavarian pretzel. He placed me to the right of his center which positioned his right leg into my center. Ewww. His upper half went east while his lower half went west. (Contra-body fail.) His left hand was completely open with only our palms in contact, and his digits pointing straight up, in different directions. My had patience expired early into the first dance but I tolerated to be polite, then mumbled “Thank you” after the second and briskly disengaged my unamused self.

Sometimes one half of a couple perceives that all is going well while the other half is holding their breath, anxiously awaiting the cortina. Most often, couples contribute equally to their twistedness with neither aware of their share.

Twisted comes in all degrees of intensity, length of duration, can occur at any moment and usually hangs out till the end of the dance. One majorly twisted moment can make a dance stick in our memory, but not for the reason our partner, or we, would prefer.

At one time or other even the most skilled dancer may have caused a partner to think, “Holy wonkers! That was twisted!” Yikes! What if a partner thinks that about us! Noooo! Say it isn’t so!